The ridge of the Fagaras Mountains, the great romanian classic

Also called The Romanian Alps, they are truly the grandest this country has to offer. Not to belittle the other mountains in our country, size alone is not enough to make anything the best, and we have yet to decide a number one mountain in our hearts.
Placed in the center of the carpathic arch, there is a plethora of acces ways, both from north and south, and trails to keep you busy for a lifetime. But, because time is short, in this post I'll stick to the ridge, lodges, shelters and ways to reach the ridge.


The story I'm about to tell is from several of our trips covering most of the ridge. The high chalets and access points are in separate posts.

The Făgăraş Mountains start from the enormous valley the Olt river carves in the west and are stopped in the east by the river Dâmboviţa and the mighty blade of the Piatra Craiului Mountains. If you like, the ridge can be trekked the whole way, but it takes very long, so usually it's only done from Suru Peak to Urlea or just Sâmbăta.
Here is a great map from openstreetmap.org which you can manipulate to gain a spatial reference of the described trails.


My story of the ridge starts from the refuge at Scara Peak. We got here from the town of Avrig, over Mount Bârcaciu. We first went west, towards Avrig lake, then went back east to trek the rest of the ridge. It's not the most logical way of doing it, but we had plenty of time.
The trail first climbs Scara peak, then descends and goes below the rocky Garbova peak, then descends north and east under Ciortea Peak, into the Avrig Caldera.

On the ridge towards Avrig and especially in the upper caldera of the lake Gentiana punctata still hasn't lost the battle with Veratrum album, although it is hevily grazed.


The Avrig caldera is quite special. It is guarded by three peaks: Ciortea West, Ciortea East and Turnul Lacului (The lake's tower). The last has big veins of quartz-studded reddish limestone


The Avrig caldera is very impressive and we'd never been there before, so it took us till evening to look around at the flowers and climb the rocks. We remained there for the night. 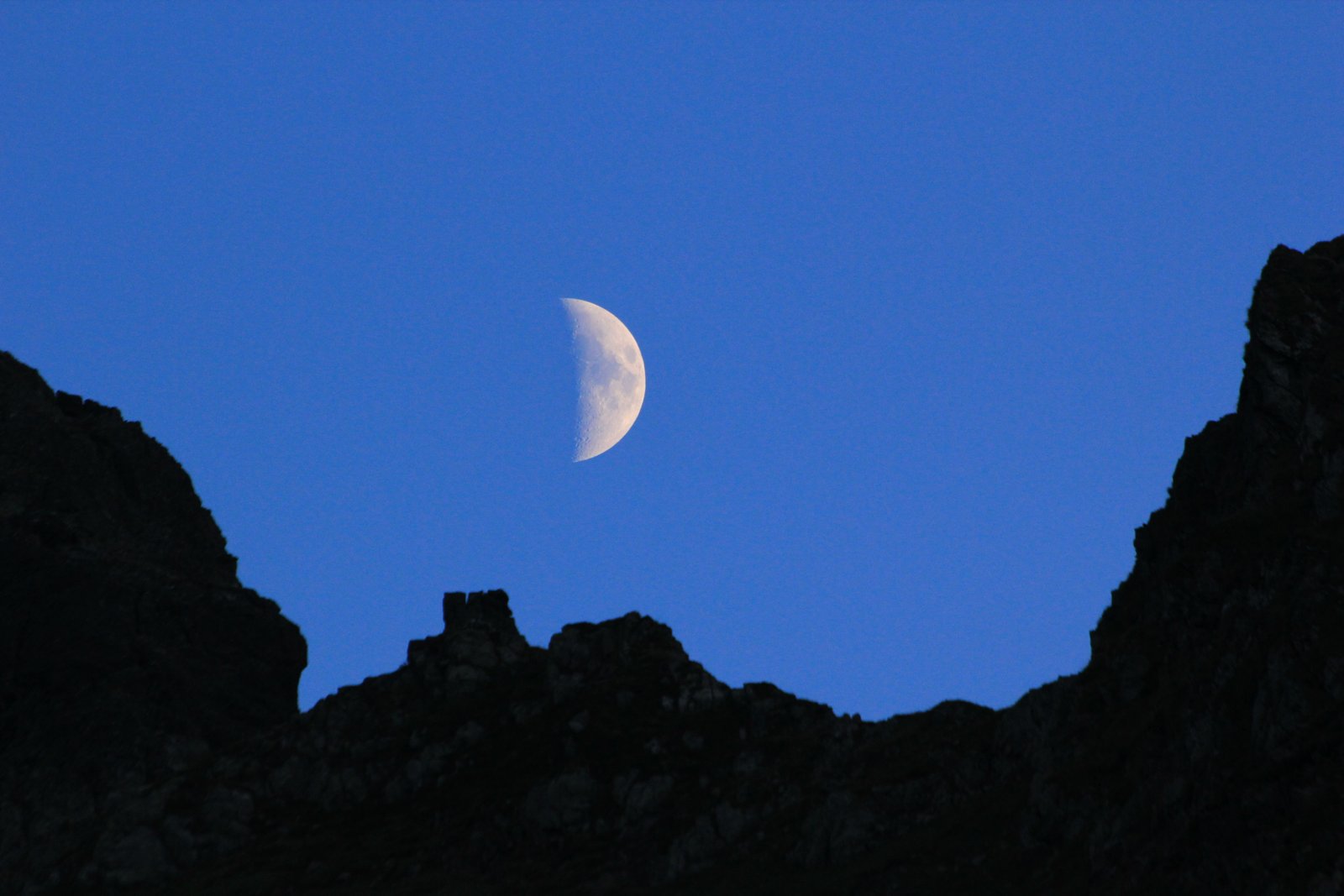 The next morning was even more glorious than the one before. We took to the ridge trail as the sheep were climbing to graze. 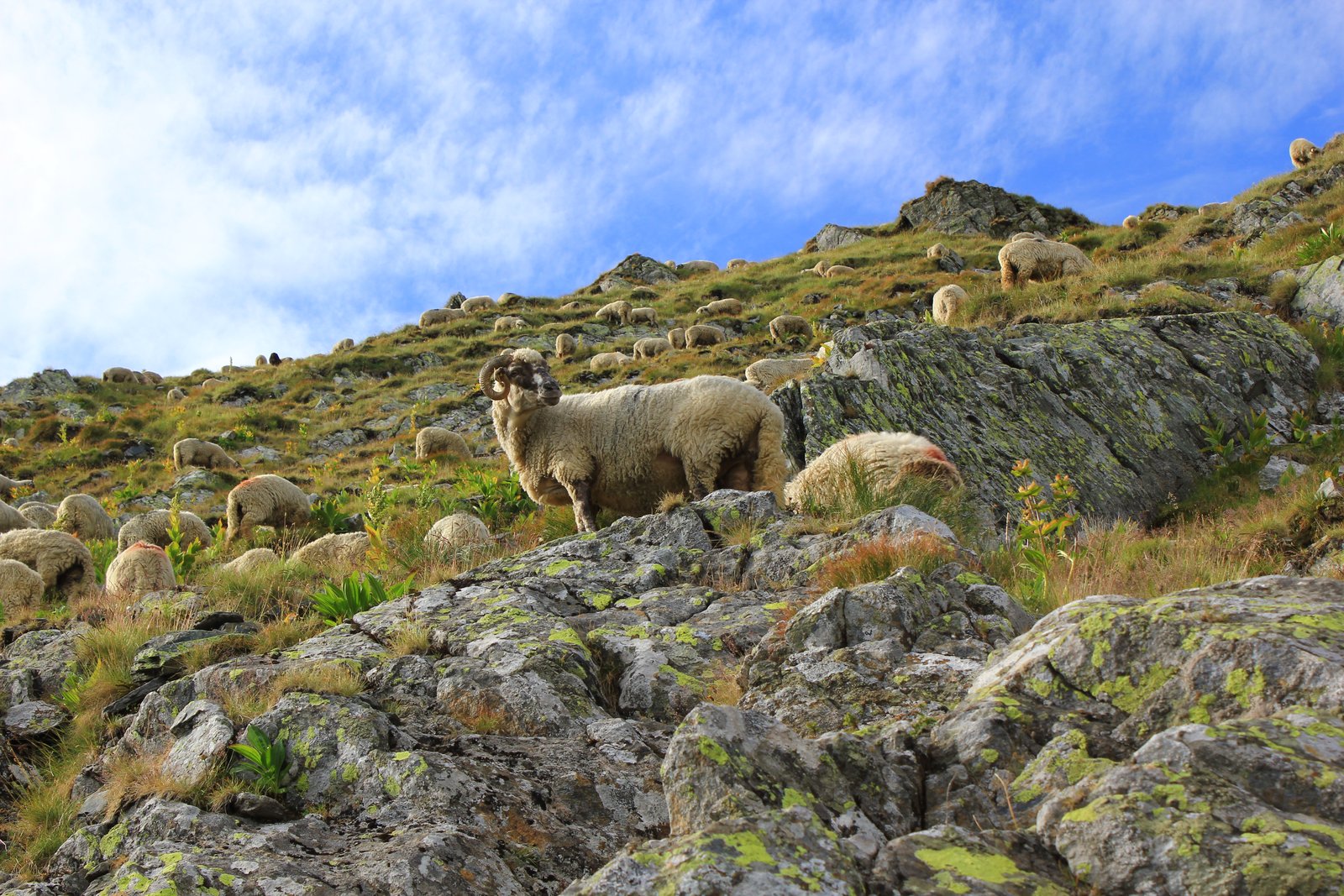 We took little time to reach Scara again. The goal for today was Călţun Lake. On this stretch, the ridge trail follows the ridge line closely for most of its distance. The ridge trail marking is a red line. 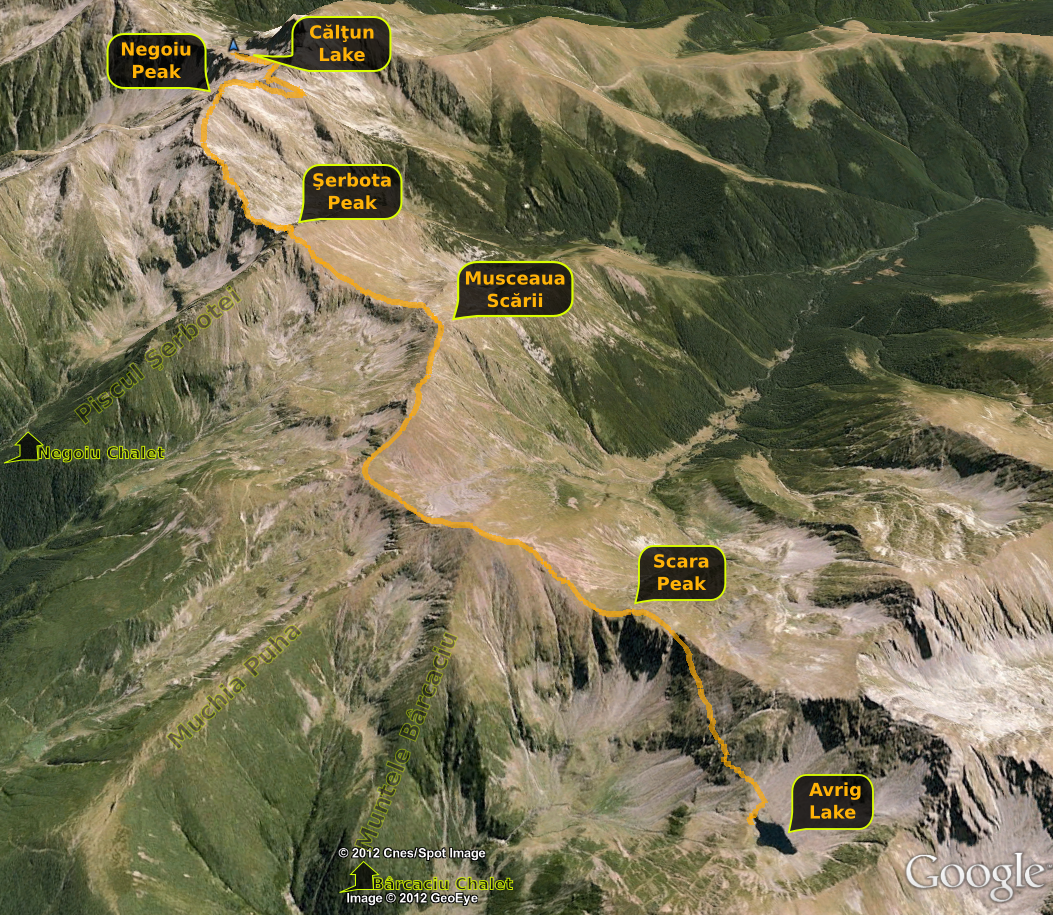 Passing the shiny back of Scara we take one last look at the old and the new shelters and continue east. Descending into Scara saddle we sight Negoiu Chalet on the sharp back of Şerbota ridge.
The main ridge first narrows until Musceaua Scării Peak, then descends into a large saddle and widens into a sort of a plateau, the long time grazing field for many sheep.


From Şerbota peak one can follow a trail marked with a blue line to Negoiu Chalet.

To continue on the ridge you must pass Custura Sărăţii a very narrow rocky ridge, descending steeply and ascending back toward's Cleopatra's saddle. This segment is the most difficult marked tourist trail in the Făgăraş mountains and maybe Romania. It's about 1A I think, and very, very fun!
It can be avoided by descending in the caldera to the south called Căldarea Pietroasa (the rocky caldera), using the yellow line trail. 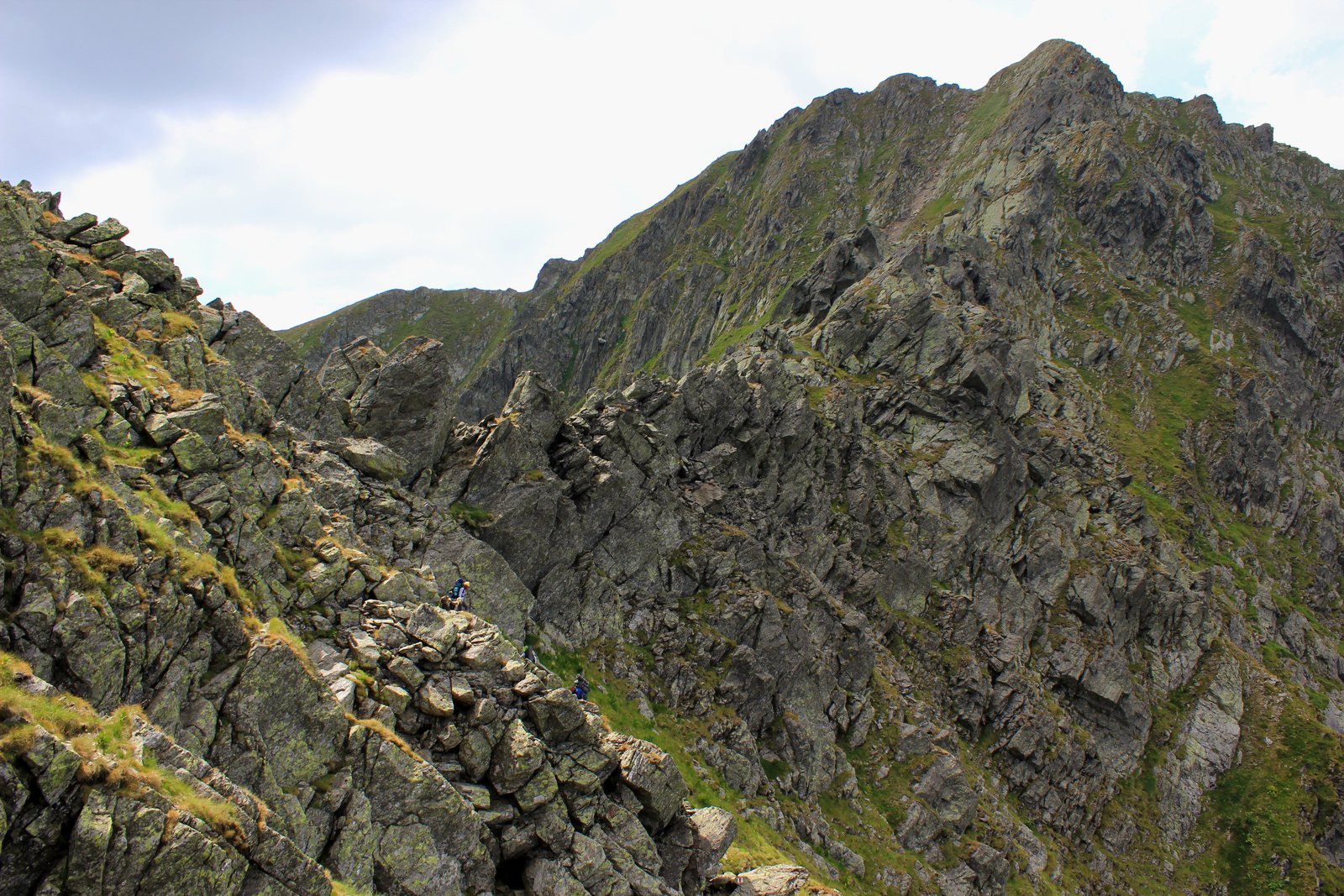 Şaua Cleopatrei (Cleopatra's saddle) is the crossroad of the ridge trail with the blue triangle trail coming from Negoiu Chalet and the trail ascending from Căldarea Pietroasă.
Read my other post to learn about access from Negoiu Chalet.

On a clear day you can see all the way to Moldoveanu Peak in the east, Vidraru lake in the south and the Cozia Mountain in the south-east.


To get to Caltun lake from Negoiu you must first descend into the steep-walled eastern caldera beneath the peak. In the past this used to be done through one of the two narrow passes: Strunga Dracului (The Devil's Pass) or Strunga Doamnei (The Lady's Pass). You can probably guess which one is more difficult. However, The Devil's Pass has very brittle rocks, and recently some of the chains were lost in a rockfall. Due to it's unstable nature, the pass is now closed and I advise against using it. Even if it should pose no significant challenges to the seasoned trekker or mountaineer, it's in a place of intense traffic and you never know who could be above you, sending a bunch of rocks your way by mistake.
The easier trail descends and goes around the walls of the caldera, entering it from the south. It takes less than half an hour more to get to Călţun lake.

The rocky caldera between Negoiu and Călţun is often ignored, but if you stop to look it's quite a magical place. In the middle of all the rocks there's a marshy little stream, full of Stellaria and Saxifraga, and when the clouds invade, getting stabbed by the rocky fangs of the upper Călţun caldera, you get a misty show. 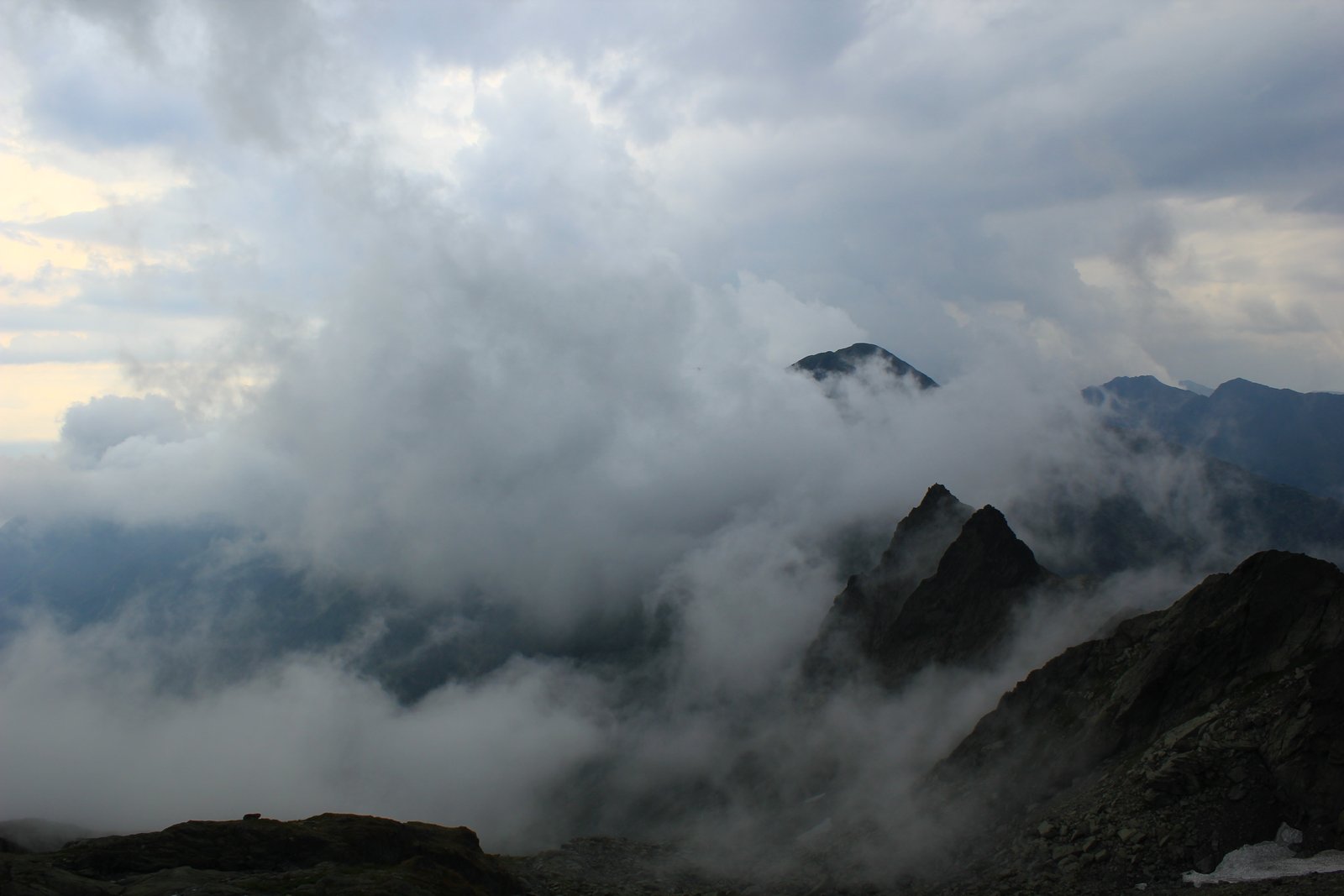 Although the sunset itself is blocked by rocky walls, if the clouds descend on the lake in the evening they reflect the golden light filling the place with a warm, eerie feeling.


Sunrise is a great time to pack your stuff and hit the ridge trail some more, after coffee and some breakfast.

So we followed the steep ridge trail leading east,over Lăiţel Peak. You can easily get to Fereastra Smeilor shelter in one day, or take a detour through Bâlea Caldera and spend a few hours eating mici and kurtos kalacs and drinking beer, and then climb back on the ridge and camp at Capra lake.

The climb makes you work up a good sweat but the view is well worth it.

We saw a chamois in the rocky saddle between Lăiţel and Lăiţa peaks. By the time I put the tele on it went down to the valley to the north. The saddle narrows to a small rocky pass where the trail gets slightly more difficult. Chains are provided for extra safety. 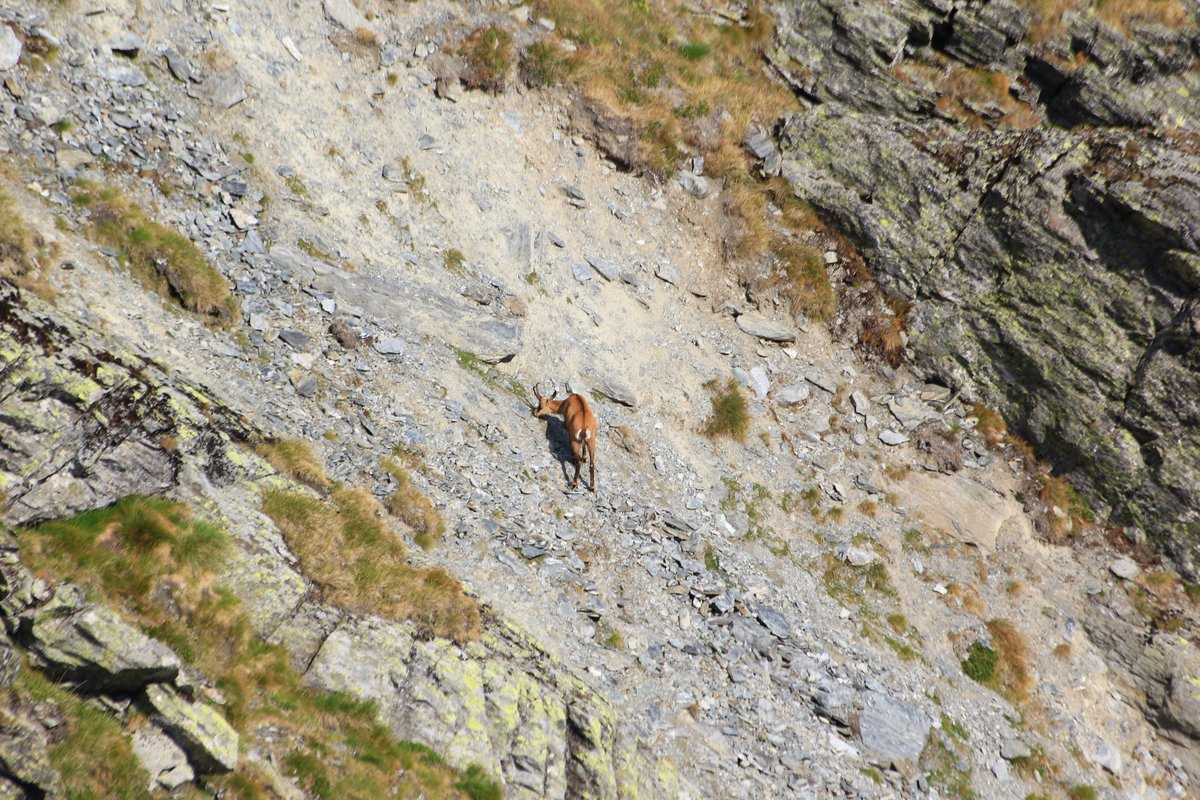 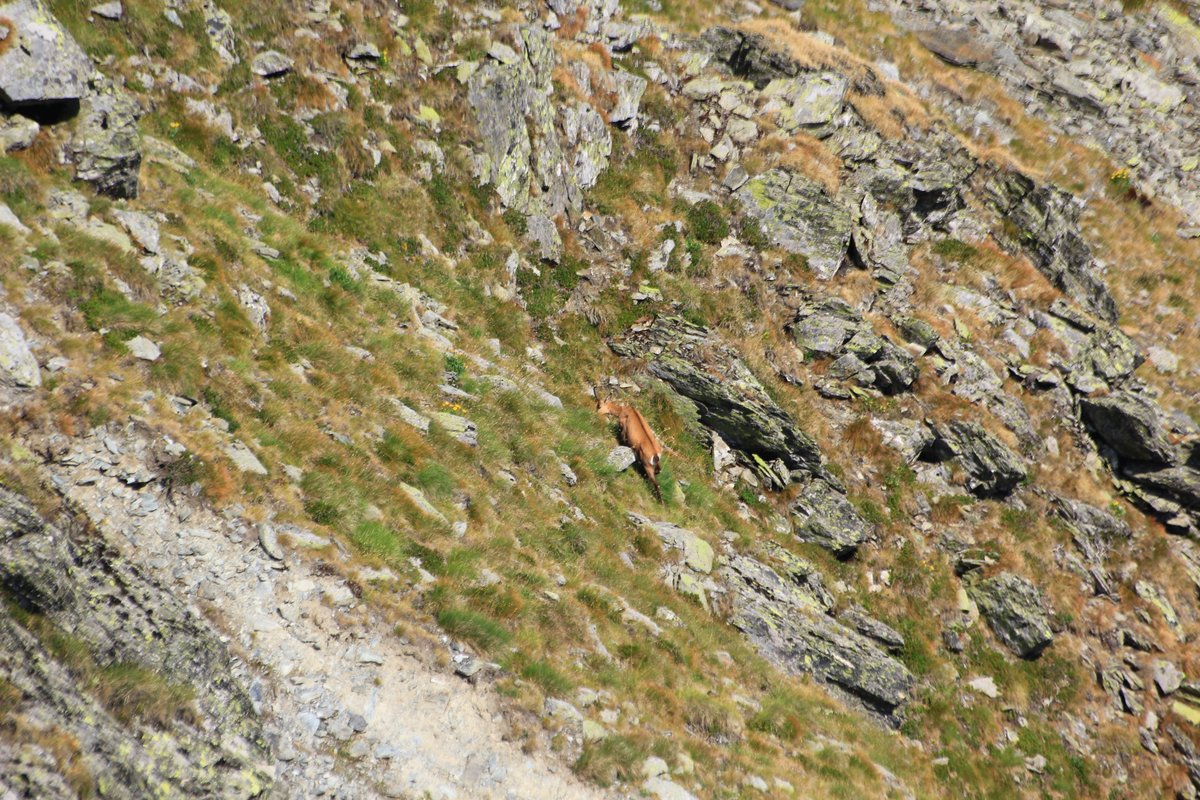 Just before Paltinu, the ridge widens into a big alpine meadow, used by shepherds for their flocks.


The ridge narrows again into a rocky pass, the trail passing first north, then south, under the beautiful, pointy tower beneath Paltinu peak. 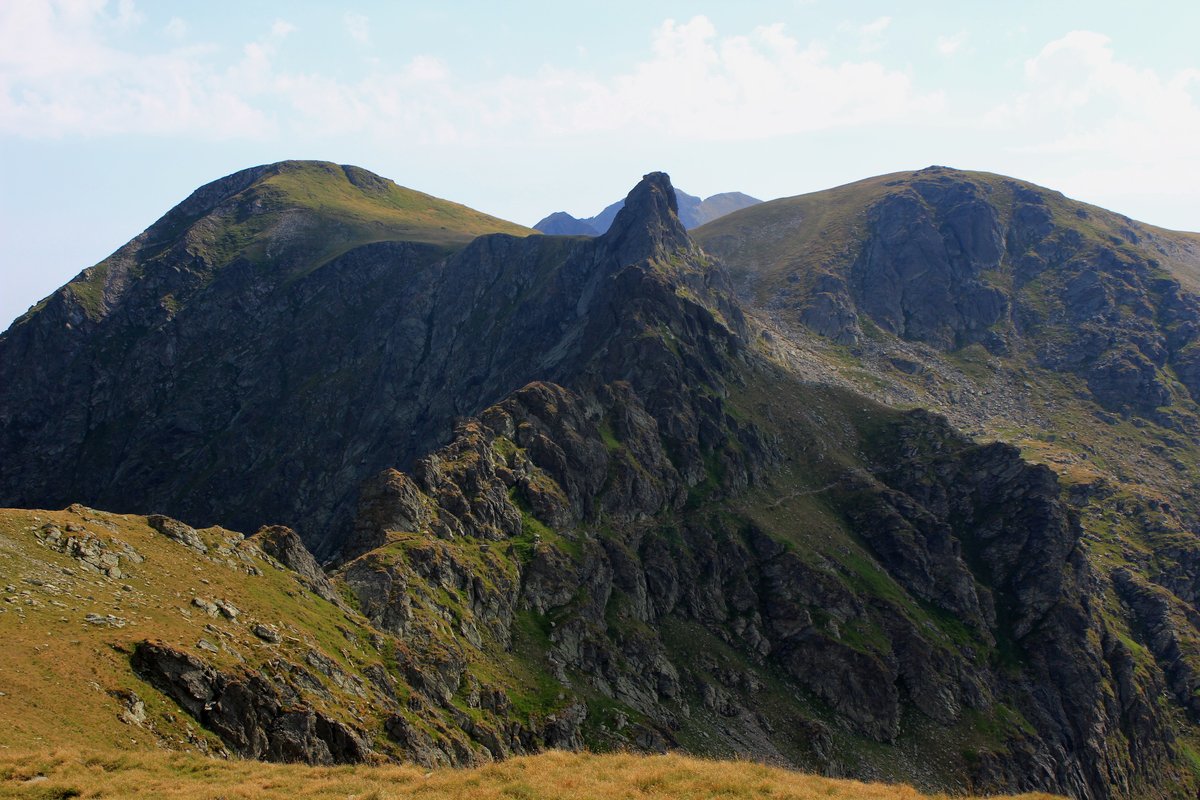 Just before Paltinu peak there's a very big spring. In recent years, a severe drought sets in after July and even this spring was almost dry. We managed to find some water by moving some rocks. It took half an hour to gather the 3 litters of water we needed.

From Paltinu we got the first glimpse of Mordor, I mean the Bâlea Caldera. For more about Bâlea, read my other post.

The trail climbs over Paltinu peak and continues towards the next peak, Iezerul Caprei, and lake Capra. Because of its proximity to Bâlea, lake Capra is also a crowded place at times and some very noisy people could camp next to it. If this is the case, you can just camp on the north side of the lake, a bit further away and above the lake, in a small dimple in the caldera, where it' quiet. Be carefull with your food and look out for bears. Dogs could also try to steal your stuff. It's best to camp at Capra only if caught by nightfall, because there's a shelter about 2-3 hours away, at Fereastra Smeilor.

Descending towards Capra you get a great view of the Bâlea and Capra calderas.


After Lake Capra, the trail descends quite allot and doesn't return to the ridge untill Fereastra Zmeilor.


The tourist trail cannot follow the ridge here because it's very difficult and it requires climbing gear and experience. The view, however is great and the scree and meadow below the Vârtopel rocky tower are amaizing. 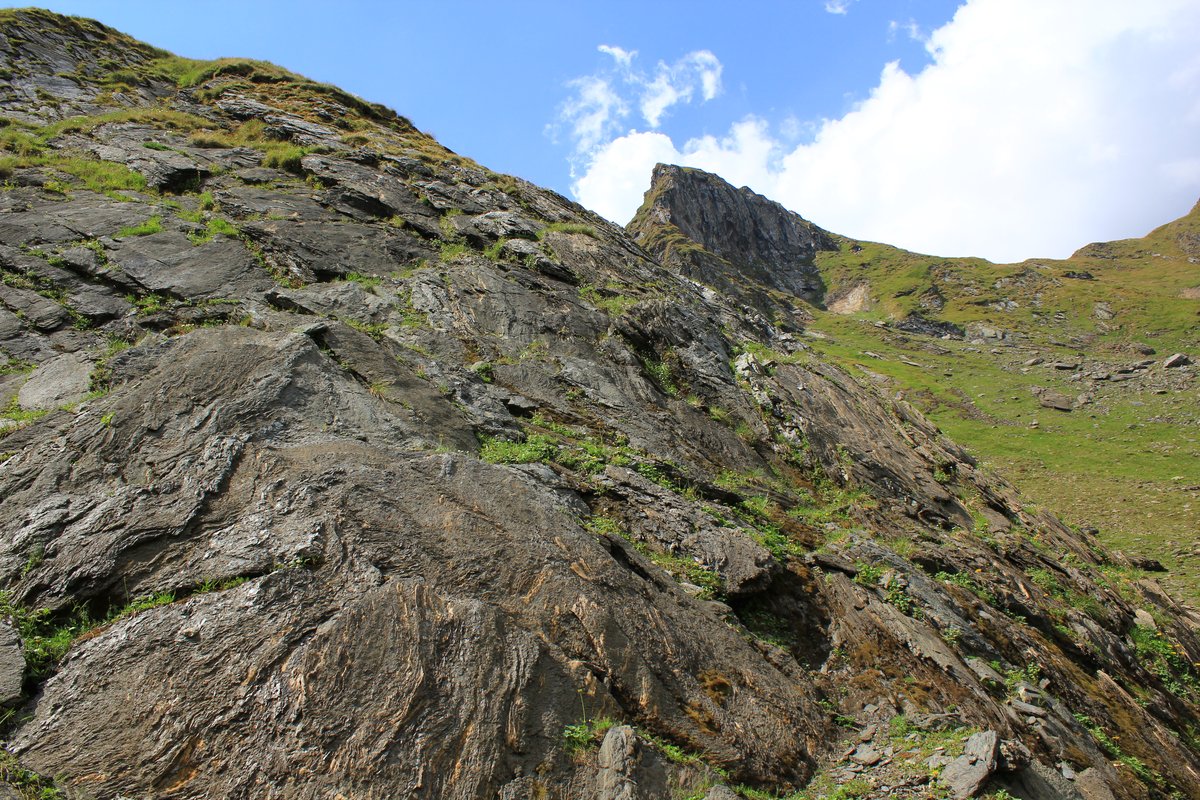 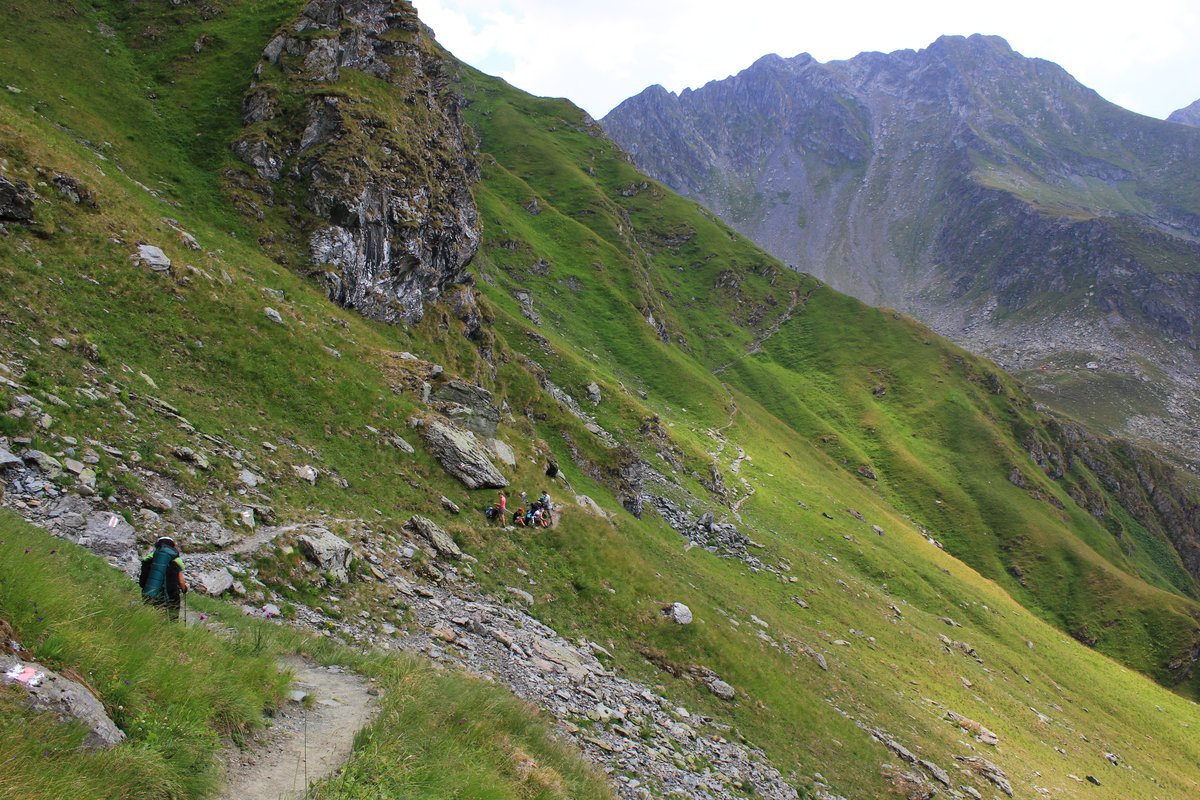 Portita Arpasului (The Gate of Arpas), or Fereastra Zmeilor (The Zmeu window). This is truly a place of fairy tales, and not just because of its beauty. Zmeu is a magical creature from the romanian folclore, sort of like an ogre or even dragon endowed with magical powers and antropomorphic shape. The place itself is another limestone vein sculpted into a beutiful arch by erosion.

We took a small detour down to the shelter to avoid a rain shower. Right after the rain stopped a para glider flew above, waving at us.

The shelter is brand-new, just like the one on Scara, but we forgot to take a picture. The old one is broken, probably by an avalanche.

Here the ridge has a short narrow portion which is very spectacular. The trail continues north of Arpasul mic through a big caldera, towards Mircii Peak (2461m). An alternative to follwing the ridge trail would be another trail, marked with blue cross, going through the 3 upper calderas straight to Podragu lake.

After exiting the caldera, the ridge narrows again and climbs over a small, sharp peak, called Paru de Fier (The iron rod), giving a spectacular view of Buda Lake.


There was a new shelter at Podu Giurgiului lake, just like the others but now it's completely destryed.  From the extent of the damage on the heavy steel beams it looks like an avalanche may be the culprit.

We followed the brutal descent along the eroded trail to Podu Giurgului lake. The trail From Bâlea to Podragu and Moldoveanu is the most traveled in Făgăraş.
The storm clods we feared initially dispersed and the sun was shining its last golden rays of the day. We were heading for the Podragu Caldera curiously followed for a brief time by two hawks.


Because it was late and we were the only ones on the trail we got to see quite a few animals.

We were greeted by some chamois while we were descending in the caldera to have a beer at the chalet and find a tent space.


Rainy days with allot of fog followed and we ended our trip at Podragu, taking pictures of chamois, marmots and a bear. More about it in my other post. We don't think it's worth going in the blind unless you have to. We go mainly for the view.
So the next part of the trip is from 3 years ago, when we caught superb weather on Moldoveanu.

The ascent to Moldoveanu peak presents no technical difficulty. The altitude difference is not to much and the view is great on clear days.


If you wish to continue the ridge east, the descent from Viştea is steep and rocky but not very difficult and full of beautiful flowers.

Just under Viştea Mare Peak there's the Portiţa Viştei shelter. There's also a new, more spatious, solar-powered shelter there as well but the last time we went we used our tent.


Portita Mare a Sambetei is the furthest east we were on the ridge. We climbed there from Sâmbăta chalet, which, from what I understand, was renovated and looks great. It also has a new keeper which is supposed to be a great guy so it's probably a great place to stay.

I hope you enjoyed my description and found it useful. Please feel free to ask any questions in the comments and we will try to answer them as best as we can.
Come and visit, but please do it in small groups and respect the environment.